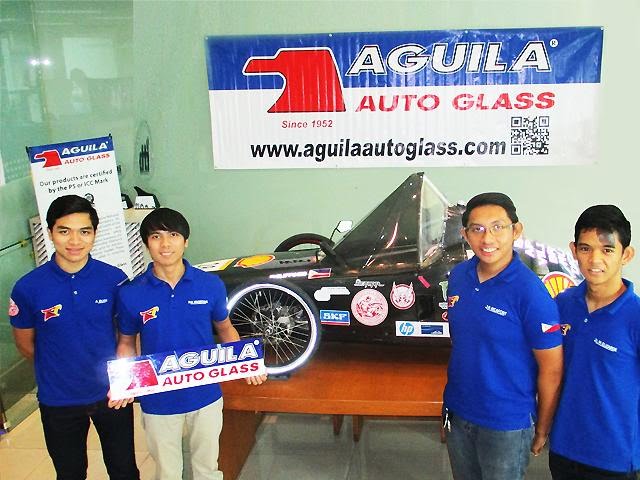 Mapua Institute of Technology (MIT) is one of the pioneers in the Shell Eco-marathon Asia which promotes energy-efficiency, safety, teamwork, and design.

Always leading the way, the school keeps being one of the leading competitors, especially in the Philippines. Aguila, a prototype concept – gasoline energy, has already set its name in the competition “Shell Eco-marathon” and has been featured in a wide channel of print media. “Aguila Auto Glass” read one such literature about the Aguila car and decided to sponsor the university team. From then on, Aguila has retained its name from 2014 up until today.

Aguila was especially made by a team of crack engineering students from MIT for the Sepang International Circuit, Malaysia track, but it wasn’t able to go into battle since the competition was cancelled due to unfavorable weather.

Aguila was still able to proudly bag the Off-track award in “Technical Innovation” for the gasoline energy type for its indigenous rattan (thin pliable stems of a palm) seat. In 2014, Aguila ranked 6 out of 13 competitors in the gasoline energy type with 158.6km/l at Luneta Park, Manila. In 2015, it ranked 8 out of 22 with 126km/l at Manila. And for the first time in the country, a prototype gasoline was able to achieve 335km/l! And ranked 2nd in its category last competition
Aguila will compete along with Hiraya, an urban concept – diesel energy, in the first ever Shell Eco-Marathon Philippines on February 2-5, 2017 in Clark International Speedway and the Shell Eco-Marathon Asia on March 16-19, 2017 in Changi Exhibition Centre where students from around the world innovate themselves to construct the most energy efficient vehicle for the future of mobility.
Aguila Auto Glass, along with other sponsors, funded Aguila to be what it is today. Without Aguila Auto Glass, its continuous development would be deterred thus lessening its competitive edge. Mapúa Team Cardinals has closely kept its partnership with Aguila Auto Glass as it is one of the most trustworthy companies up to date thus helping in promoting the advocacy of the team. Mapúa Team Cardinals believes that continuous development over an innovation is what kept Aguila Auto Glass and Aguila competitive in its field.